Colorado gained 34,298 jobs in September 2011 compared to September of last year, and the non-seasonally-adjusted unemployment rate fell year-over-year from 8.4 percent to 7.6 percent. According to the most recent employment data, released today by the Colorado Department of Labor and Employment, total employment in September, not seasonally adjusted, rose to 2.502 million jobs. There were also 15,000 more people in the work force during September, compared to September 2010. 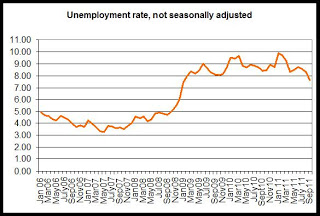 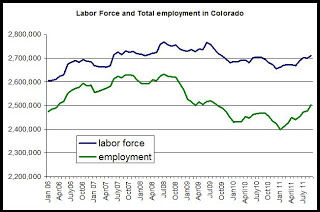 The employment total is now 129,000 jobs below the peak levels experienced during July 2008 when there were 2.63 million employed workers. Compared to the labor force peak in July 2008, the labor force is now down by more than 57,500 workers. 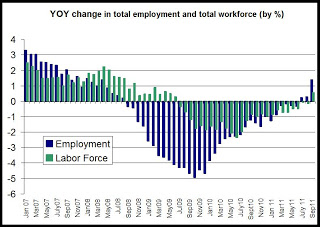 These numbers come from the Household Survey employment data, so the size of the workforce is dependent on the number of people stating that they are actively looking for work if not employed. Discouraged workers who have stopped looking for work are excluded.

The increase in employment, according to the Household Survey, is apparently being driven, at least somewhat, by an increase in self-employment. According to the Bureau of Labor Statistics, the Establishment Survey of employment, which is based on surveys of major employers, showed a decline of 3,900 payroll jobs in September. The Household Survey, on the other hand, showed a gain in jobs. So, it seems that at least some of the payroll positions lost are being replaced by jobs that are not tracked by the establishment survey. The Denver Business Journal reports on it here.
Posted by Ryan McMaken at 8:57 AM

Thanks, for Sharing your good ideas related to Employment Services, really it is very helpful and I like it.