Colorado 24th in nation for unemployment during September

The Bureau of Labor Statistics today released employment information on all states.

Regional and state unemployment rates were generally little changed in September. Twenty-five states recorded unemployment rate decreases, 14 states posted rate increases, and 11 states and the District of Columbia had no rate change, the U.S. Bureau of Labor Statistics reported today. Thirty-eight states registered unemployment rate decreases from a year earlier, 10 states and the District of Columbia had increases, and 2 states experienced no change. The national jobless rate was unchanged at 9.1 percent, but was 0.5 percentage point lower than a year earlier. 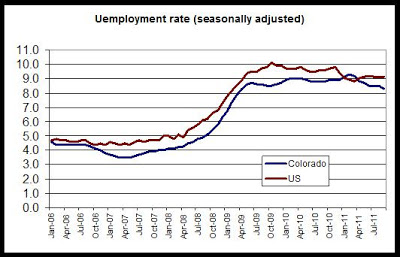 The unemployment rate in Colorado fell from August to September, dropping from 8.5 percent to 8.3 percent, according to the seasonally-adjusted numbers. The national rate also held steady at 9.1 percent. 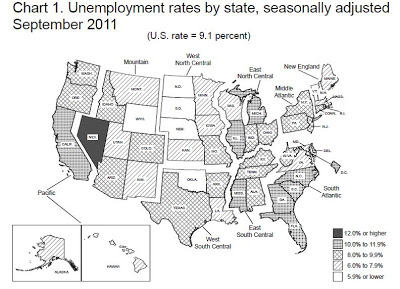 Colorado remains in the middle of the pack when it comes to statewide unemployment rates. At the regional level, however, Colorado contains some metro areas that have unemployment rate well below the national rate, such as the Boulder area and the Fort Collins area.
Posted by Ryan McMaken at 10:28 AM