Metro Denver condo and townhome prices down 19.7 percent since 2006

CoreLogic's home price index does include some information on attached housing as can be seen here. And, we'll now more regularly post MLS information on condos and townhomes as it becomes available.

In the first graph, we see that median prices for condos and townhomes have decreased consistently since the second half of 2006. Prices in the metro Denver and Pikes Peak regions are both down 19 percent from peak levels while prices statewide are down 47 percent. The larger decline in condos and townhomes is likely the result of sizable drops in condo and townhome prices in mountain communities over the last three years. 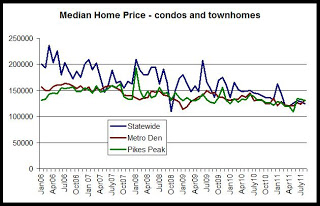 In the second graph, we see that the number of condo and townhome sales transactions are well below levels seen before 2008. Here, as with home prices, we see a deterioration in the market that began before the single-family markets began to show similar drop-offs. 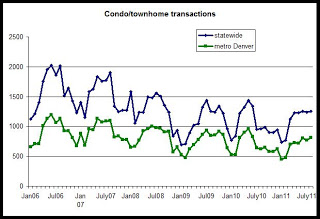 It looks like overall, the total number of closings statewide will be about equal in 2011 compared to what it was during 2010. Closings are up slightly from 2009. Statewide there were 8819 closings from Janaury to August of this year, and 8826 closings during the same period last year. There were 8370 closings during 2009. (The distribution of sales among the different months is quite different from 2010 to 2011 due to the end of the homebuyer tax credits in April 2010.)

Also, we can note that the median price in single-family homes has been largely flat since mid-2009 while it has continued to fall among condos and townhomes. As noted above, condo/townhome prices are down 19 percent from peak levels, although single-family prices in metro Denver are down only 10 percent. 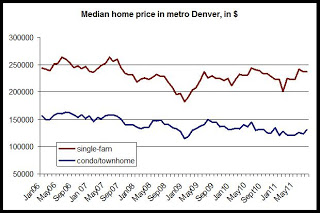