The Colorado Association of Realtors has posted home sales closings and median home price data through July. The data reflects the Metrolist numbers from various markets across the state.

Below, I've pulled out the two largest markets - metro Denver and the Pikes Peak region - and the statewide totals. The data is from 2003 through July of this year. As you can see, home sales activity has a regular cycle for each year, with sales peaking midyear, and bottoming out in January and February.

We can note that there is a general downward drift in total closings since 2006 as the demand for homes began to soften. We can also see that closings collapsed during the second half of the year in 2010 following the expiration of the homebuyer tax credit.

For 2011, we can see that closings probably peaked for the year during July, and that closings will probably continue to move downward for the rest of the calendar year. It is rare for closings to decline in July and then move back up again in August, although it does happen, as was the case in 2006 and 2007. 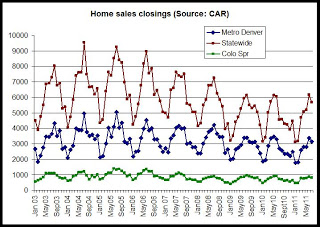 As expected, the year-over-year comparison from July 2010 to July 2011 shows an increase in closings in Denver metro, Pikes Peak and statewide, with increases of 17.6 percent, 11.9 percent and 18.3 percent, respectively.

According to the CAR data, from July 2010 to July 2011, the median home prices in metro Denver and Pikes Peak decreased by 1.6 percent and 3.8 percent, respectively. There's no surprise there given the sorts of home price data we're seeing out of Case-Shiller, FHFA, CoreLogic and others. Statewide, on the other hand, home prices declined during the same period by 13.8 percent. It looks like this larger drop is a result of sizable drops in the median home price in places like Glenwood Springs, Grand County and Pagosa Springs.

For the graph below, I've pulled out the two largest markets's median prices and the statewide median price. 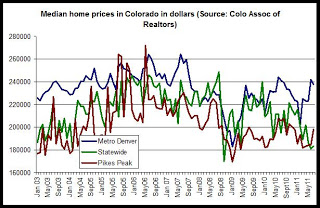 The Denver metro price (which doesn't include Boulder) is back up near $240,000 while the statewide price and the Pikes Peak priceare both down below $200,000. Overall, it appears that Denver metro continues to be one of the more resilient markets. The Pikes Peak area has been largely flat since late 2009, and the statewide numbers have been heading downward compare to the large markets. This is likely due to continued foreclosure and home demand issues on the Western Slope and in some mountain communities. Grand Junction.

*This data is for single-family homes and does not include attached housing.
Posted by Ryan McMaken at 3:25 PM