Housing starts in West region unchanged in August at 13,000 starts

Housing starts in the West Census region of the US, which includes Colorado, were unchanged from August 2010 to August 2011, counting both single-family and multi-family units. According to new housing construction and housing starts data released yesterday by the US Census Bureau, there were approximately 13,000 housing units started in the West during August 2011. Of the new units started, 8,400 were single-family structures and 4,700 were structures containing more than one housing unit. 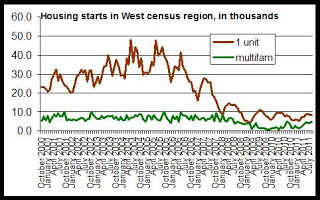 The first graph shows the difference between single-family starts and starts for structures with more than one housing unit. Both remain near ten-year lows, but single-family starts rose 2.4 percent from August 2010 to August 2011. Starts for structures with more than one unit decreased by 4.0 percent during the same period, falling from 4,900 units during August 2010, to 4,700 units during August of this year. The drop in new multifamily starts is a change from a trend established in recent months during which multifamily starts showed year-over-year increases for several months in a row.

The second graph shows month-by-month comparisons in housing starts for each year in the West. August's housing-starts total increased from July to August. Over the past decade, starts have often fallen from July to August, so this year's month-over-month increase from July to August indicated a little bit of strength month to month. August 2011's total remains tied with last August for a three-year high for August, but remains well below totals reported from 2003 to 2008. 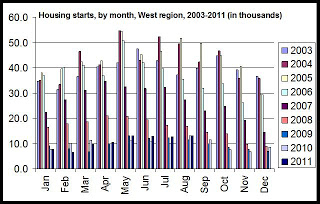 More sustained growth was visible in starts for structures with more than one housing unit. August's total was lower than August 2010, but is at a 12-month high. The August 2011 multifamily total for starts is the second-highest total for any month since August 2008. August is apparently a busy month for multifamily starts. 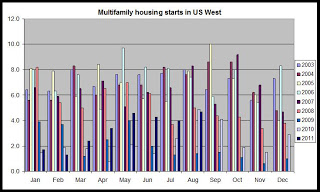 Starts for buildings with more than one unit were relatively numerous in August, compared to most months in recent years, but the fact that totals remain below August totals for every year except 2009 (in the graph) there is mildly growing -yet restrained- activity in housing starts for multifamily structures.
Posted by Ryan McMaken at 7:12 AM