Bankruptcies in Colorado down 7.6 percent in August 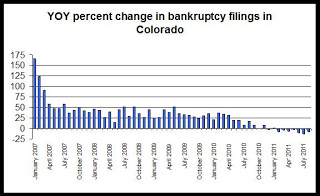 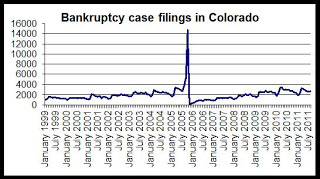 Recent monthly bankruptcy totals are now on a level similar to what was experienced during May 2004 and 2005, during a non-recessionary period. Foreclosures increased from July to August. In recent years there has been no clear season patters of foreclosure activity from July to August. April tends to be a peak month for bankruptcy filings as people use their tax refunds to pay for bankruptcy attorneys and filing costs.
Posted by Ryan McMaken at 3:35 PM