However, when permit totals are adjusted to the number of existing housing units in each county, the counties with the larges amounts of permit activity were Chaffee, Park, Douglas, El Paso and Weld.

The first map shows the relative amount of single-family permit activity adjusted for the existing size of the housing stock in each county, thus creating an index value. The counties are then broken out in quartiles reflecting the amount of single-family activity compared to other counties. The top quartile has the largest amount of new permitting compared to the number of existing units. The bottom quartile has the smallest amount. 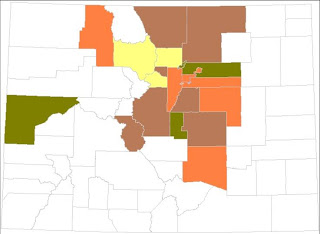 In absolute terms, and as expected, the counties with the largest populations have the most permit activity. But when adjusted to the number of existing housing units (as shown in the map), the hot spots for single-family permits right now are Douglas, Park and Chaffee and El Paso counties. Weld, Teller and Adams and Broomfield counties land in the second quartile.

During the first eight months of 2011, the areas with relatively few new single-family permits relative to the size of the existing stock are Pueblo, Jefferson, Denver, Arapahoe and Boulder counties.

In the larger context, single-family permits remain well below totals experienced prior to 2007. From 2006 to 2008, single-family permits in the state decreased 60 percent from 31,000 to 12,000. Permit activity appears to have bottomed out in 2009. When disussing permit activity from 2008 to the present time, we're looking at permit totals that are near 20-year lows. (See here for more.)

It is also helpful to see which counties have shown the largest increases and decreases in permit activity. In the map below, we see that comparing the first eight months of this year to the same period last year, Larimer and Teller counties were among the counties with the largest increases in single-family permit activity. Boulder, Jefferson, Denver and Douglas counties also showed increases. On the other hand, permits decreased in Mesa, Weld, Adams, Arapahoe, El Paso and Pueblo counties. 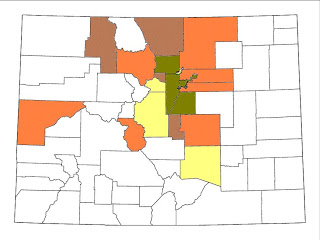 With relatively large numbers of new permit activity in 2011, and with a year-over-year increase in each county, both Larmier County and Douglas County show solid demand for new permitting at this time. In spite of year-over-year declines in totals, El Paso County continues to report a significant share of the state's overall permitting activity while Weld county reports a surprisingly large number of new single-family permits in the wake of very high foreclosure totals. Much of the new permit activity in Weld county is likely coming from expanding communities in southern Weld County.
Posted by Ryan McMaken at 3:13 PM