Yesterday, the Bureau of Labor Statistics released the August CPI for US urban areas and regions. From August 2010 to August 2011, the CPI for all urban areas increased 3.8 percent. In the West region, the CPI increased 3.0 percent which is the third-largest year-over-year increase since 2008, before the deflationary effects of the 2007-2009 recession began to be felt.

Nationally, the CPI increased 3.8 percent, year-over-year, and was driven by increases in food and transportion costs, according to the BLS release:

The Consumer Price Index for All Urban Consumers (CPI-U) increased
0.4 percent in August on a seasonally adjusted basis, the U.S. Bureau
of Labor Statistics reported today. Over the last 12 months, the all
items index increased 3.8 percent before seasonal adjustment.

The seasonally adjusted increase in the all items index was broad-
based, with continuing increases in the indexes for gasoline, food,
shelter, and apparel. The gasoline index rose for the 12th time in
the last 14 months and led to a 1.2 percent increase in the energy
index, while the food index rose 0.5 percent, its largest increase
since March.

In the first graph, which shows CPI change in the West region, we can see that the CPI growth in August 2011 is now roughly the fourth-highest increase observed for August during the past ten years. 2005, 2006 and 2008 showed larger increases, and price increases in those years were partially countered by strong growth in employment and incomes, but at the present time, income growth has been flat in recent years, as discussed here. 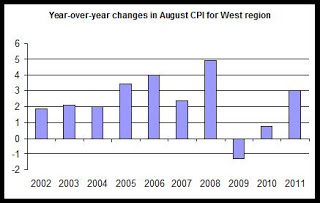 In the West region, as well as nationally, price increases are being largely driven by transportation costs, which increased by 8.0 percent, year over year. Food costs also increased significantly, rising 4.1 percent. Price increases in housing have begun to inch up with July's year-over-year increase at 1.4 percent. Housing costs to consumers will likely move upward as rent increases in the face of increasing demand and little new construction.

The second graph shows year-over-year changes in CPI for all months since 2002. August's CPI showed the third-largest month-over-month increase reported since October 2008. 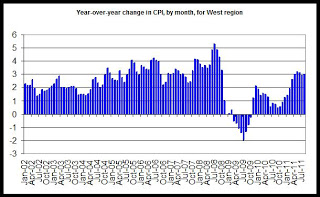