New personal income data for Colorado was released today by the BLS.

Colorado has now exceeded the personal income levels reached prior to the financial panic of 2008.

Over ten years from the 1st quarter of 2002 to the first quarter of 2011, US personal income increased 44 percent, and in Colorado it increased 42 percent. In the Rocky Mountain region, the increase for the same period was 49 percent. 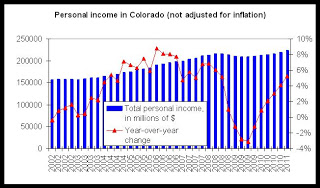 Since the peak levels reached during the third quarter of 2008, personal income is up 3.2 percent, but the CPI has increased 1.9 percent during the same period.

Much of the increase that has occurred may be attributed to a 29 percent increase in personal current transfer receipts since the 2008 peak.

An important component of personal income is "personal current transfer receipts." These are forms of income not died to wages and employment income and include payments such as social security payments, unemployment insurance, Medicare and Medicaid.

When personal current transfer receipts are removed from personal income, income growth is not as robust. 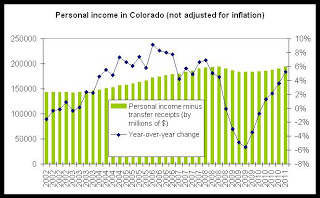 Without the inclusion of transfer receipts, personal income in Colorado is only 0.1 percent above peak levels. In other words, by this measure, Colorado only returned to peak income levels during the first quarter of this year.

When adjusted for inflation, however, personal income (minus transfer receipts) has declined since 2008. Since the peak period, the CPI has increased 1.9 percent. Comparing the 0.1 percent growth in income since the peak with the 1.9 percent increase in the CPI, we see that income growth has not kept up with price inflation and that real incomes have not yet returned to peak levels.

Overall, Colorado's real estate markets and labor markets have not suffered as much as many markets, but in a variety of ways, including personal income, Colorado is recovering more slowly than the nation. Compared to all other states, Colorado is ranked in the middle, placing in the third quintile. See the map here.

Generally speaking, personal income has been largely flat in Colorado since 2008 reflecting a sluggish job market and wage growth. Income growth from wages and employment has been sluggish as is shown when transfer receipts are excluded from calculations. This makes sense given that May 2011 employment data showed Colorado's total employment totals falling by 6,100 jobs when compared year over year.