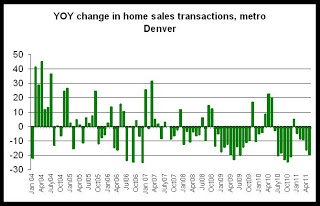 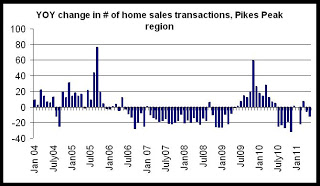 Overall, these numbers show that overall sales transactions remain muted. This is likely due to ongoing challenges in obtaining mortgages and a lack of demand fueled by ongoing uncertainty about employment and wages.

In addition, year-over-year comparisons in closings continue to be affected by the run up in closings through June 2010 that occurred due to the end of the homebuyer tax credit. In the face of this 2010 run-up, 2011 numbers will tend to be considerably smaller. While legally, homes could be still be eligible for the tax credit when closing as late as September 2010, most of these tax-credit closings occurred by the end of June 2010. More sound comparisons in year-over-year changes in closings will likely be available later this summer.

See here for the latest on median home prices.

Note: closings information reflects single-family homes sales only. The metro Denver district does not include Boulder County.
Posted by Ryan McMaken at 1:10 PM