Residential remodeling activity increased 18 percent in the Western U.S. from April 2010 to April 2011. According to the April 2011 Residential Buildfax Remodeling Index, released last week by BUILDERadius, The Western U.S. showed the largest rate of increase in its index for April 2011, outpacing all other regions and the U.S. as a whole.

According to Buildfax's April 2011 release:

According to Joe Masters Emison, vice president of research and development at BuildFax, “April traditionally sets a baseline for the rest of the year in residential remodeling activity, and April 2011 is the best we’ve seen since the beginning of the index in April 2004.” 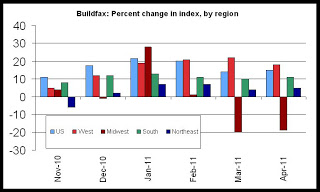 As we've seen in recent data for new home sales and housing starts, new home construction remains at historic lows. Many homeowners turn to remodeling projects, as is reflected in the April report.

The big exception is the Midwest region, which has shown substantial decreases in remodeling activity over the past two months. Buildfax theorizes that this may reflect unusually cold weather in the Midwest during the early part of Spring this year. 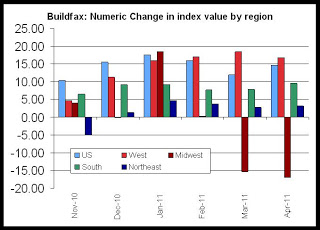 The BuildFax Remodeling Index is based on construction permits filed with local building departments across the country. The index tracks the number of properties permitted. The national and regional indexes all have an initial value of 100 set in April of 2004, are based on a three-month moving average, and are not seasonally adjusted.
Posted by Ryan McMaken at 1:30 PM