According to data recently released by the Colorado Association of Realtors, prices have been showing signs of stability in recent months, with Metro Denver prices near $223,000 during the past six months. In Colorado Springs, the median price has been near $183,000 for the past three months.

The first graph shows median home prices for the Metro Denver and Colorado Springs regions since 2003. 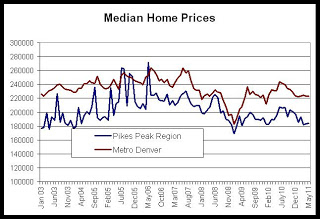 In general, median home prices in the two regions have fallen since mid-2010 following the end of the homebuyer tax credit, although they have stabilized in recent months.

The second and third graphs show how far below the most recent peak of the median home prices in the two regions. 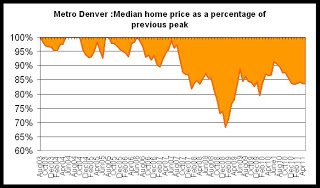 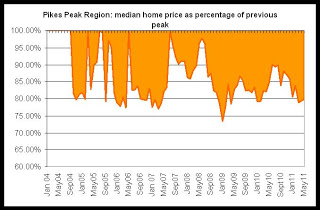 Comparisons with Case-Shiller and April Prices

The Case-Shiller numbers are a three-month average up through April. Similarly, the Realtors Association's April median price for metro Denver show a year-over-year decline of 3.2 percent.

Note: The median prices presented here are for single-family homes only and do not include condos.
Posted by Ryan McMaken at 12:29 PM