Consumer prices in May in western U.S. climb 3.2 percent

The Bureau of Labor Statistics released last week the May CPI for US urban areas and regions. In the West region, from May 2010 to May 2011, the CPI increased 3.2 percent. This is the largest year-over-year increase since 2008, before the deflationary effects of the 2007-2009 recession began to be felt.

In the first graph, we can see that the CPI growth in May 2011 is now at the third-highest increase observed for May during the past ten years. Only 2006 and 2008 showed larger increases, and price increases in those years were partially countered by strong growth in employment and incomes, but at the present time, income growth has been flat in recent years, as discussed here. 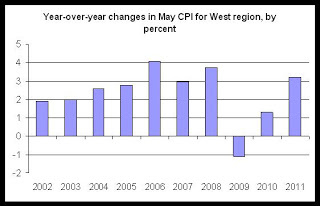 The price increases are being largely driven by transportation costs, such as gasoline, which increased by 11.1 percent, year over year. Food costs also increased significantly, rising 3.7 percent. 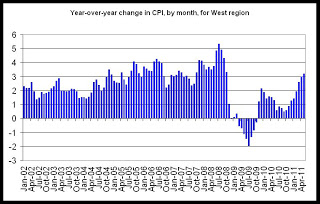