Housing permits by county: Almost all new multifamily permits in only 3 counties

Of the 1,042 new multifamily permits issued during the first five months of 2011, 989 of them, or 94 percent, have been issued in only three counties. According to new housing permit data recently released by the Census Bureau, almost all of new multifamily permitting activity year-to-date through May 2011 has occurred in Denver, El Paso and Larimer counties with 633 permits, 230 permits, and 126 permits, respectively.

Including permits for single-family permits, and permits for duplexes, triplexes, and fourplexes, 4,727 permits have been issued in Colorado during 2011.

The map shows which counties have the highest concentrations new permit activity. Not all counties report local permit data, but the counties that have reported data account for approximately 81 percent of statewide permit activity.

(See here for statewide permit data through May 2011.) 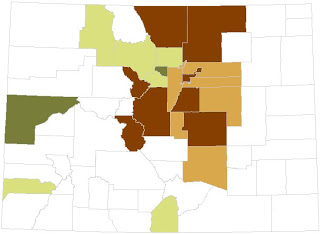 Most permit activity is for single-family units.

At 4,727 total new units for the state, year-to-date, permit totals are well below totals that were common during the past decade. For example, during the same period (Jan-May) of 2005, 18,855 permits were issued in Colorado, with 1,808 of them being for multifmaily units.

Note: Permit activity measures "New Privately Owned Housing Units." and does not include commercial construction such as retail or office.
Posted by Ryan McMaken at 1:56 PM