The number of new hires in the U.S. West, which includes Colorado, fell 10 percent, year-over-year from May 2010 to May 2011, as layoffs increased 17 percent during the same period.

The magnitude of the year-over-year declines in new hires was impacted at least partially by the hiring of Census workers during Springs 2010.

By contrast, the year-over-year change in hires was the largest drop in 16 months. 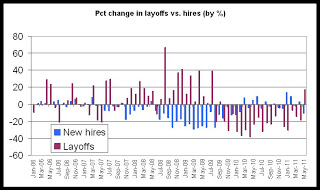 While the national year-over year comparisons in these factors showed little change, the regional changes for the West were more pronounced.

Note that when total hires (the blue line) are above total separations (the purple bar) then a positive net number of jobs have been added to the economy. 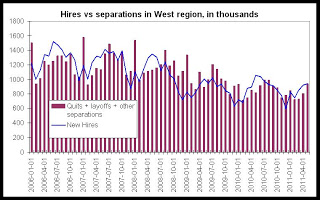 According to Colorado's jobs report for May 2011, there were 6,100 fewer jobs in May 2011 compared to May of last year, but the non-seasonally-adjusted unemployment rate fell year-over-year from 8.6 percent to 8.5 due to declines in the size of the work force.

See here for more.
Posted by Ryan McMaken at 3:32 PM