Twenty-four states recorded unemployment rate decreases, 13 states and the District of Columbia registered rate increases, and 13 states had no rate change, the U.S. Bureau of Labor Statistics reported today. Forty-three states and the District of Columbia posted unemployment rate decreases from a year earlier, four states reported increases, and three states had no change. The national jobless rate was essentially unchanged at 9.1 percent, but was 0.5 percentage point lower than a year earlier 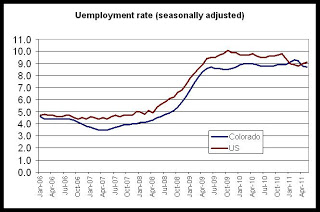 The unemployment rate in Colorado fell slightly from April to May, falling from 8.8 to 8.7 percent, according to the seasonally-adjusted numbers. The national rate rose slightly from 9.0 percent to 9.1 percent during the same period.

The BLS map below shows state by state comparisons. 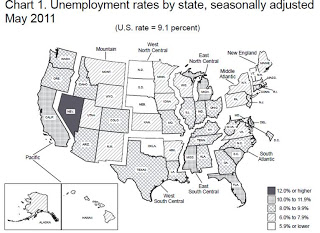 With Colorado's unemployment rate back below the national rate, Colorado may continue to be seen as a desirable location for job seekers. This may in turn impact overall household formation in Colorado and the demand for housing.
Posted by Ryan McMaken at 4:12 PM