Nevertheless, the report does provide some comparisons with other metro areas in the nation. The map on the last page shows that the Colorado Springs, Grand Junction, Pueblo and Greeley metro areas all have unemployment rates (not seasonally adjusted) above the national rate of 9.3 percent (not seasonally adjusted). The Fort Collins-Loveland area, the Denver area and the Boulder area all have unemployment rates below the national rate. 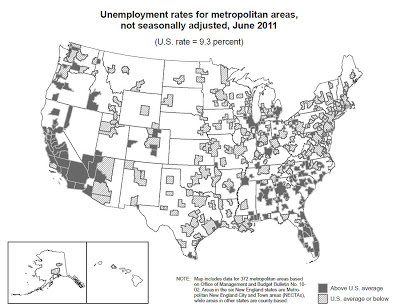 National comparisons remain important insofar as perceptiosnof the local job market drive household creation in Colorado. As long as Colorado is perceived as being a better job market than many metro areas in the nation, such a perceptions will foster household creation and population growth in the state.
Posted by Ryan McMaken at 10:07 AM