Home prices in the West region of the U.S., which includes Colorado, fell 7.1 percent from July 2010 to July 2011. According to new existing home sales data, recently released by the National Association of Realtors, the median home price fell more in the West than in any other region. The median home price in the South, for example, fell 2.2 percent from July 2010 to July 2011. 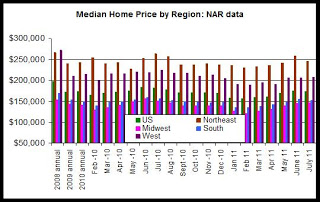 Home sales transactions (closings) rose 12.9 percent in the West region, which was the smallest increase in home sales closings of any region, year-over-year. Home sales rose 25 percent in the Midwest from July 2010 to July 2011, and closings rose by 17.1 percent nationally during the same period.

The second graph shows closings by region. In general, closings increased each month from January 2011 to June 2011. July's total fell unexpectedly, as July is generally a very active month for sales. While all regions showed a month-over-month decrease, all regions showed increases in the year-over-year comparisons for July.

Overall, July's sales activity was higher than was the case during July of last year. This was expected. During the summer of 2010, sales activity fell significantly following the end of the home buyer tax credits. Many homeowners rushed to close their home sales by June 2010 in order to take advantage of the tax credit. Consequently, the second half of 2010 showed diminished home sales activity. 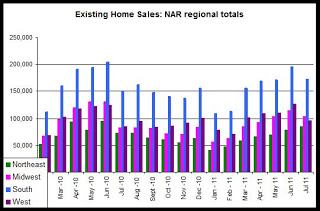 The NAR data tends to be the most optimistic among the various reports on home prices and home sales activity. The most recent Case-Shiller data, although only through May, suggests continued declines in prices.

Conclusions: As can be seen in the first graph, home prices during recent months are down from where they were a year earlier, and the median price in the West is still below the annualized median prices for 2008, 2009 and 2010. The region shows stability in prices and a lack of significant upward pressure in prices right now.

Closings continue to be hampered by a lack of available financing and, according to the NAR release, by a significant number of cancellations on home purchases:

Contract failures - cancellations caused largely by declined mortgage applications or failures in loan underwriting from appraised values coming in below the negotiated price - were unchanged in July, reported by 16 percent of NAR members. In addition, 9 percent of Realtors® report a contract was delayed in the past three months due to low appraisals, and another 13 percent said a contract was renegotiated to a lower sales price because an appraisal was below the initially agreed price.