According to the June report from the S&P/Case-Shiller Home Price Index, including data up through June, many cities measured by the index showed improvement from June to July. The increase largely reflects seasonal factors.

The month-to-month change was primarily due to seasonal factors, and the year-over-year change showed a continued slow decline in home prices.

According to the press release issued by S&P:

With the second quarter’s data, the National Index recovered from its first
quarter low, but still posted an annual decline of 5.9% versus the second quarter of 2010. Nationally, home prices are back to their early 2003 levels.
As of June 2011, 19 of the 20 MSAs covered by S&P/Case-Shiller Home Price Indices and both monthly composites were up versus May - Portland was flat. However, they were all down compared to June 2010. Twelve of the 20 MSAs and both Composites have now increased for three consecutive months, a sign of the seasonal strength in the housing market. None of the markets posted new lows with June’s report. Minneapolis posted a double-digit 10.8% annual decline; Portland is not far behind at -9.6%.
Thirteen of the cities and both composites saw improvements in their annual rates; however; they all are in negative territory and have been so for three consecutive months.

The first chart shows the the home price index for the Denver area back to 2001. 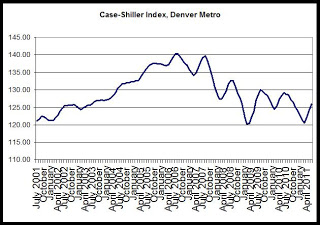 The index dropped, year-over-year, in all cities measured. Denver's market showed a less-small decrease than all but two of the 20 cities measured in the index. Boston and Washington, DC declined, year over year, by 2.1 percent and 1.2 percent, respectively.

Minneapolis and Portland reported the largest declines with the home prices dropping year over year by 10.8 percent and 9.6 percent, respectively. 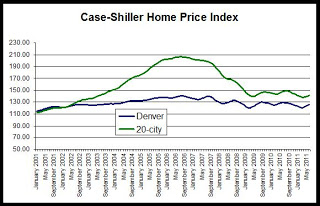 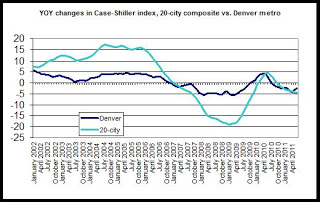 The last chart provides a closer look at year-over-year changes in the Denver index. Note that for July 2010 through July 2010, the change has fallen below zero, and reflects the end of the homebuyer tax credit’s end which has led to a fall in demand and a decline in the home price index. The upward trend in the index in response to the tax credit is clear during late 2009 and early 2010. 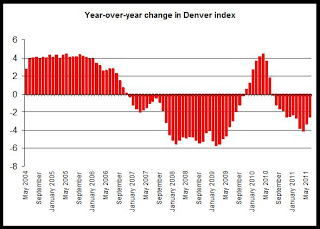 In recent months, the Denver index has been slightly above the indices for the same months of 2009. Comparisons with the same period of 2010 is problematic given the large effects of the end of the tax credit. Comparing to 2009, we see that prices have still moved little since the first half of 2009 when the index was in the 120-123 range. During the first half of 2011, the Denver index has been in the 122-124 range, signalling very limited growth over the past two years.
Posted by Ryan McMaken at 9:19 AM