In the West, new home sales at lowest level reported in more than ten years

New single-family home sales in July rose slightly in the US while rising by half in the West region, which includes Colorado. However, according to new data released by the Census Bureau today, the first seven months of 2011 have shown the smallest number of new home sales in at least a decade in the West. July 2011's total was the second-lowest July total recorded in at least ten years.

Nationally, a similar trend was reported. According to the AP:

WASHINGTON (AP) -- Sales of new homes fell for the third straight month in July, a sign that housing remains a drag on the economy. If the current pace continues, 2011 would be the worst year for new-home sales on records dating back at least half a century.

Sales fell nearly 1 percent in July to a seasonally adjusted annual rate of 298,000, the Commerce Department said Tuesday. That's less than half the 700,000 that economists say represent a healthy market.

For the first seven months of 2011, there were 44,000 new homes sold in the West compared to 46,000 during the same period last year. 2011's total is the smallest year-to-date total recorded in the West in more than a decade. 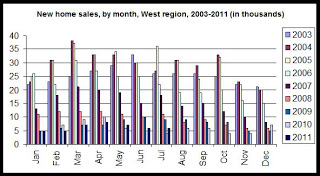 The second graph shows that new home sales continue to fall well below the peak periods for sales that occurred earlier in the decade. 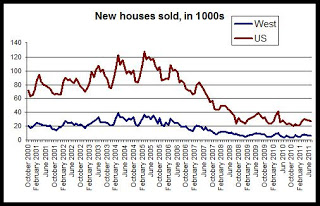 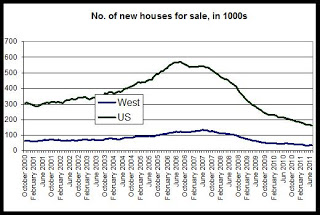 The number of new single-family homes for sale in the West is now near the lowest level it's been in more than ten years. This reflects very low demand in the face of an ongoing and large number of new foreclosures and low-priced properties in many areas of the West, including Colorado. Although foreclosures have fallen in Colorado in recent years, foreclosure rates remain at historic highs.

As a final note, we can also look to the new home inventory. In this case, we calculate inventory by subtracting the number of new home sales in a given month from the number of new homes for sale at the end of the previous month. In the final graph, we see that the inventory, at 28,000 is near the ten-year low of 27,000 homes. This is good news for owners seeking to sell homes since it suggests that fewer new homes are sitting and waiting to be sold, thus diminishing some of the inventory-driven downward pressure on prices. 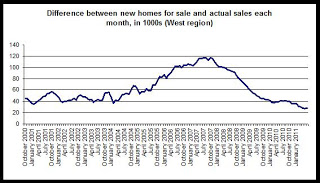