The region-wide vacancy rate in metro Denver has fallen every quarter for the past seven quarters when compared to the same quarter a year prior. As can be seen in the first graph, the year-over-year change in vacancies has not been positive since the third quarter of 2009, when the vacancy rate rose 13.8 percent over the year prior. 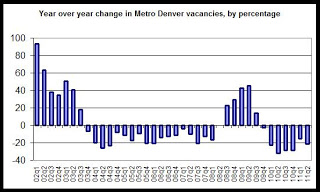 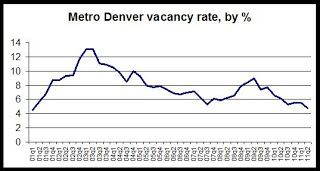 Not unexpectedly, growth in median rents has begun to build in the region as well. Notably, the median rent for the metro Denver area (compared year-over-year) has not decreased since the fourth quarter of 2009. Median rent growth outpaced inflation for much of 2010, but during the second quarter of 2011,median rent growth has again fallen below the inflation rate (which was 3.1 percent, year-over-year, in June). This suggests that there is some downward pressure on median rents. This is likely due to income factors resulting from an ongoing lack of significant growth in wages and employment in Colorado. 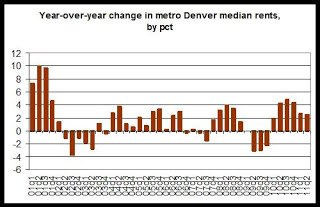 The region-wide median rent in metro Denver has increased for the past six quarters when compared to the same quarter the previous year. As can be seen in the fourth graph, the past three quarters have shown growth that is among the strongest growth trends since 2002, but does not threaten to match growth from the 2000-2001 period at this time. 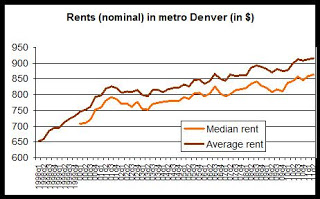 While the recent growth in rents and the declines in vacancy rates does not in itself prove continued demand for multifamily rentals in the region, the relatively small amount of new construction of rentals in the area will contribute to ongoing rent growth and tightness in vacancies.

The graph also shows that, for the most part, average rents have tracked closely with median rents. We would expect to see average rents diverge from median rents in a situation in which there are a lot of pricey new properties entering the market, or if high-end units begin to see a lot of rent growth, while B and C properties are seeing little growth.

Interestingly, we can see in last graph that the difference between the median rent and the average rent has grown in recent quarters. Between 2000 and 2007, the difference between median and average rents was 45 dollars or less. Since 2007, the difference has usually exceeded 50 dollars. This suggests that a relatively small number of units (compared to the overall stock of rental units) are experiencing some significant rent growth while the majority of units are experiencing much less growth. (For more on the relationship between average and median rents, see here.) 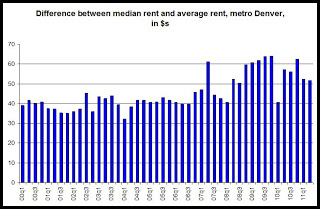 Note: The average rent information above is not adjusted for inflation. For information on inflation-adjusted rents, see here.
Posted by Ryan McMaken at 10:56 AM