CoreLogic: Home prices in Denver down 3.14 percent in Colorado

Core Logic's June 2011 Home Price Index (HPI) for Colorado was down 3.14 percent from June 2010 to June 2011. Nationally, the index fell 6.83 percent, and it fell 1.5 percent in the Denver-Aurora-Broomfield metro area during the same period.

The first graph shows the year-over-year changes for the past 26 months in the US, Colorado and the Denver metro area. Over the past two years, the general trend in all three areas has been shaped by the home buyer tax credit, which was introduced in 2008 and expired in April 2010. Clearly, according to this data, home prices climbed throughout the duration of the tax credit period, but have declined since its expiration. 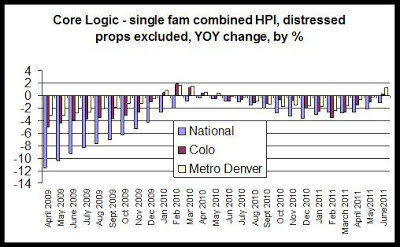 Core Logic also separates distressed properties to provide insight into the effects of foreclosures and short sales on local home prices. As the second graph shows, when distressed properties are removed from the overall HPI, the percentage changes tend to be closer to positive territory. This has especially been the case since the end of the tax credit, and in metro Denver at least, when distressed properties are excluded, the year-over-year change is actually above zero in June for the first time since May 2010. Nationally, for June, the HPI was down 1.12 percent nationally, but it was up 0.24 percent in Colorado statewide and up 1.22 percent in metro Denver.

Since the end of the tax credit, in Colorado and metro Denver, the year-over-year change in attached units has been larger in recent months than it was during the initial drop in prices following the 2008 financial crisis. 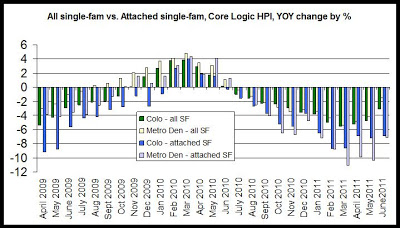 See the recent summary on home prices for the most recent data provided by other home price indices. Overall, the data has pointed toward continued declines in home prices in Colorado.

The CoreLogic HPI is a three month weighted average of April, May and June (June weighted the most) and is not seasonally adjusted (NSA).
Posted by Ryan McMaken at 9:11 AM