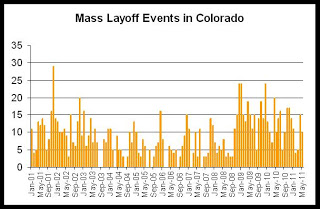 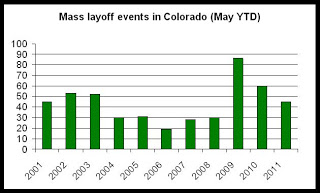 New claims for unemployment insurance rose year over year in may by 14 percent to 1,171 in May. There were 1,024 new claims during May of last year. New claims for unemployment insurance have also gradually fallen since early 2010. The 14 percent increase in May, compared to May of 2010, is substantially higher than the year-over-year change at the national level. However, it is too soon to know if this increase indicates any sort of new trend. 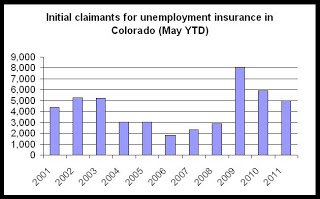 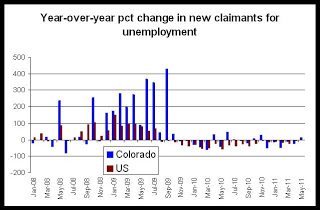 In spite of the 14 percent year-over-year increase in new claimants for May alone, the year-over-year comparisons clearly show that both new claims and mass layoffs are down from both 2009 and 2010 so far this year. However, total employment in Colorado is still 190,000 jobs below peak levels. New layoffs and new unemployment claims continue to fall, but there is little job creation going on at the same time to provide re-entry into the workforce. The fact that recent layoffs are such a small portion of the total number of jobless persons suggests that those people who are unemployed have been unemployed for an extended period of time. (The most recent Colorado employment data states that there are 226,000 unemployed workers in Colorado.)
Posted by Ryan McMaken at 10:56 AM