In May, employment in Colorado metro areas improves relative to the nation overall

The BLS released its report yesterday on unemployment in 372 metro areas in the US. The data for Colorado is not different from the statewide report already released by the Colorado Department of Labor and Employment. The chart with local unemployment rates is here.

Nevertheless, the report does provide some comparisons with other metro areas in the nation. The map on the last page shows that the Colorado Springs, Grand Junction, Pueblo and Greeley metro areas all have unemployment rates (not seasonally adjusted) above the national rate of 8.7 percent (not seasonally adjusted). The Fort Collins-Loveland area, the Denver area and the Boulder area all have unemployment rates below the national rate. 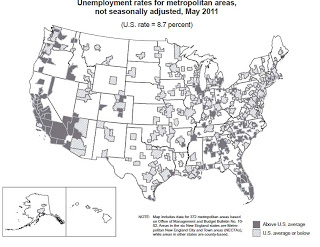