Bankruptcy filings in Colorado down 2.4 percent

In Colorado during May, total bankruptcy cases filed fell 2.4 percent, year over year, to 2,845 cases. During May 2010, 2,916 cases were filed. May was the fourth month in a row in which bankruptcies declined year over year, and it marks only the fifth time in at least four years that a monthly bankruptcy total has been lower than the same month one year earlier. 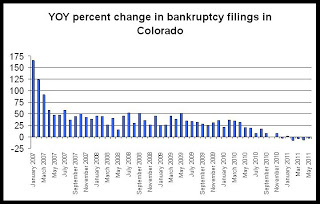 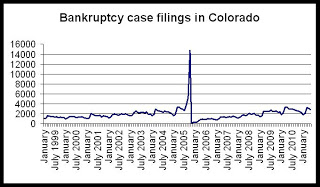 Recent monthly bankruptcy totals are now on a level similar to what was experienced during May 2004 and 2005, during a non-recessionary period. The decline in bankruptcy filings from April to May was expected. April tends to be a peak month for bankruptcy filings as people use their tax refunds to pay for bankruptcy attorneys and filing costs.
Posted by Ryan McMaken at 4:01 PM