House prices in April in the Mountain region, which includes Colorado, fell 10.9 percent, year-over-year. Nationally, the house price index fell 5.6 percent. The new house price index numbers, released today by the Federal Housing and Finance Agency, also showed that the national index is down 19.1 percent from the peak level reached in June 2007, while the Mountain region's index is down 32.2 percent over the same period.

The FHFA monthly index is calculated using purchase prices of houses purchased with loans that have been sold to or guaranteed by Fannie Mae or Freddie Mac.

From March 2011 to April 2011, however, the US index increased by 1.8 percent, which is one of the largest month-to-month increases recorded since 2006.

The 10.9 percent decline in the Mountain region is the largest year-over-year decline recorded since July 2009. Year-over-year declines have accelerated in recent months, but any comparison between the spring months of 2011 with the same period of 2010 must take into account the effects of the homebuyer tax credit. To be eligible for the tax credit, new buyers needed to have properties under contract by April 2010. The rush to purchase before the deadline would have pushed up the demand for housing during the Spring of 2010. So, year-over-year comparisons with April 2010 will show much less demand in April 2011 than during the year prior. 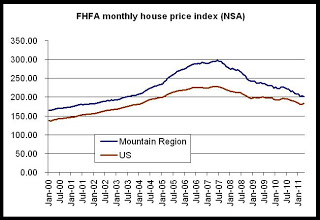 Notably, the FHFA index does not show a "double dip" as can be seen in the Case-Shiller data (discussed here) in which prices begin to recover in 2009, but then fall again after mid-2010. The FHFA monthly data shows almost nothing but losses following mid-2007. 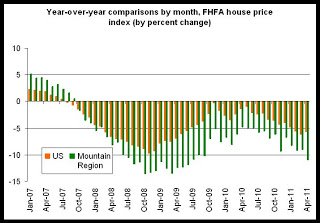 We can note that the Mountain region has performed more poorly (from a seller's perspective) than the national index. This runs contrary to some local experience and some statistics. The Case-Shiller data for the Denver metro area, for example shows that local prices did not decline as much as the national composite index following the financial panic in 2008.

Since the Case-Shiller data is specific to the Denver area, this contrast between the two studies might also suggest that while the Denver area has recovered somewhat, many areas of the state are doing less well. Home prices in Grand Junction, for example, are down considerably from peak levels experienced in 2008. (According to FHFA quarterly data)
Posted by Ryan McMaken at 12:33 PM