The House Price Index (HPI) fell from the first quarter of 2010 to the same period this year in every Colorado metro area, including Boulder, Colorado Springs, Denver-Aurora, Fort Collins-Loveland, Grand Junction, Greeley and Pueblo.

The first graph shows the year-over-year change in each region for each quarter. For the sake of visual clarity, the graph only shows data back to 2005. 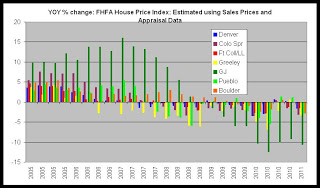 -Greeley hasn't seen a year-over-year increase in its HPI since 2006.

-The Boulder HPI held out the longest, and did not fall into negative territory until the third quarter of 2009.

-The Grand Junction HPI reflects classic bubble behavior with a large run-up that has in turn declined sharply since 2008.

The second graph shows the actual HPI values for each quarter going back to 2000. In general, the HPI began to plateau during 2007 and was decling in most areas by 2008. A big exception in the Grand Junction area which continued to increase rapidly well into 2008. 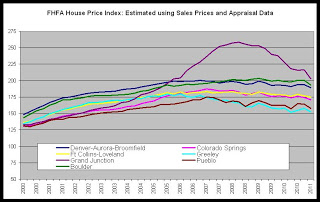 Since the peak period of the first quarter of 2007, the HPI has fallen in all regions. The following shows the post-peak declines for each region:

When contrasted with the national post-peak decline of 14.8 percent, most regions in Colorado are showing relatively mild declines.

This report overall suggests that while there is a fair amount of price stability in many areas of Colorado, prices continue to fall. When compared with Case-Shiller and local Metrolist data, we can say with a fair degree of confidence that through the first quarter of 2011, and into the second quarter, weakness in demand for for-purchase housing persists.

The index values presented and analyzed in this article are not seasonally adjusted.
Posted by Ryan McMaken at 10:21 AM