Case-Shiller’s home price index for the Denver area fell 0.6 percent from February to March, and fell 3.8 percent,year over year, from March 2010 to March 2011.

According to the Case-Shiller report,

The National Index hit a new recession low with the first quarter’s data and posted an annual decline of 5.1% versus the first quarter of 2010. Nationally, home prices are back to their mid-2002 levels. As of March 2011, 19 of the 20 MSAs covered by S&P/Case-Shiller Home Price Indices and both monthly composites were down compared to March 2010. Twelve of the 20 MSAs and the 20-City Composite also posted new index lows in March. With an index value of 138.16, the 20-City Composite fell below its earlier reported April 2009 low of 139.26. Minneapolis posted a double-digit 10.0% annual decline, the first market to be back in this territory since March 2010 when Las Vegas was down 12.0% on an annual basis. In the midst of all these falling prices and record lows, Washington DC was the only city where home prices increased on both a monthly (+1.1%) and annual (+4.3%) basis. Seattle was up a modest 0.1% for the month, but still down 7.5% versus March 2010

In year-over-year comparisons for March, Minneapolis showed the largest drop, with a decline of 10.0 percent, while the index in Phoenix fell 8.4 percent. Home price indices fell in 19 of the 20 cities included in the study.

The first chart shows trends in the Case-Shiller index for the Denver area and for the 20-city composite index. It is clear that Denver did not experience the kind of price bubble that occurred in many other metropolitan areas, and consequently, the index has not fallen nearly as far in Denver compared to the larger composite. Prices have been largely flat since mid-2009, but continue a slow trend downward. 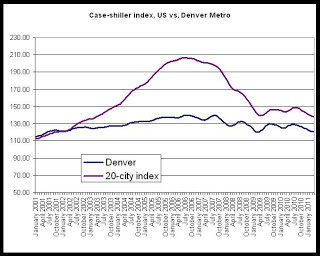 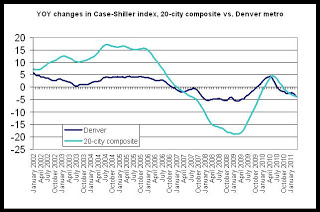 The last chart provides a closer look at year-over-year changes in the Denver index. Note that for July through March, the change has fallen below zero, and likely reflects the end of the homebuyer tax credit’s end which has led to a fall in demand and a decline in the home price index. The upward trend in the index in response to the tax credit is clear during late 2009 and early 2010. 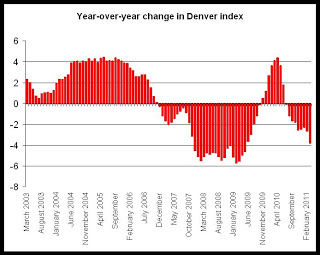 The chart shows that from July 2010 through March 2011, the home price index has been below the index for the same period a year earlier (July 2009 through January 2010). Given that 2009 was itself a weak year for home sales, this data does not suggest a speedy rebound for home prices.
Posted by Ryan McMaken at 10:05 AM