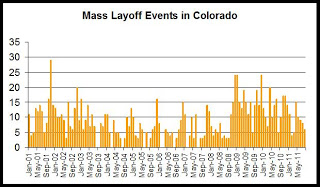 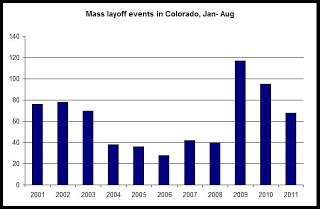 Overall, the most recent mass layoffs data suggests that the employment situation continues to stabilize. New layoffs continue to lessen, and as we've seen in the most recent employment data, July and August 2011 showed the first year-over-year growth in employment in 34 months.

As can be seen in the third graph, year-over-year changes in new unemployment claims points toward more and more stability in the labor markets as most year-over-year changes has been below zero since late 2009. Nevertheless, new claimants totals increased both nationally and in Colorado during August. August is typically a light month for initial claims, but Colorado's total was up considerably. 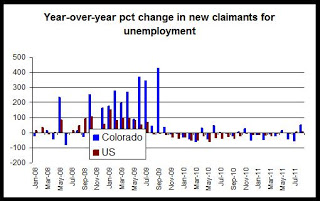 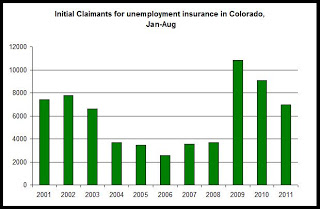 Analysis
The year-over-year comparisons clearly show that both new claims and mass layoffs are down from both 2009 and 2010 so far this year. However,total employment in Colorado is still 157,000 jobs below peak levels. New layoffs and new unemployment claims continue to fall, but there is little job creation going on at the same time to provide for re-entry into the workforce. The fact that recent first-time claimants are such a small portion of the total number of jobless persons suggests that many of those people who are unemployed have been unemployed for an extended period of time. (The most recent Colorado employment data states that there are 223,000 unemployed workers in Colorado.)
Posted by Ryan McMaken at 11:10 AM