In other words, the data source is much more broad than the old index which relied only on GSE information. Calculated Risk has a more complete write-up here.

Below, I've run an analysis using the expanded index going back to 2000. This is compiled from the newly released index, which includes archival data as well. In the future, I'll rely on the expanded-data index for the statewide numbers. However, at the metro-are level, I'll still need to rely on the older GSE-data index until FHFA expands its new index into the metro areas.


Colorado's House Price (Expanded-Data) Index (HPI), measured by the Federal Housing and Finance Agency (FHFA), fell 4.7 percent from the second quarter of 2010 to the same period this year. According to the second quarter 2011 HPI, released last month by FHFA, the home price index for Colorado, in year-over-year comparisons, has fallen for the fourth quarter in a row while the national index has fallen for the 17th month in a row.

The HPI for the United States fell 6.0 percent from the second quarter of 2010 to the same period this year, and the national HPI has not shown a year-over-year increase since the first quarter of 2007. 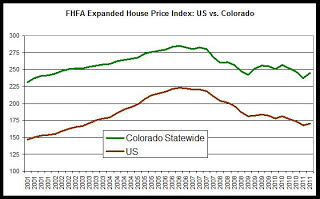 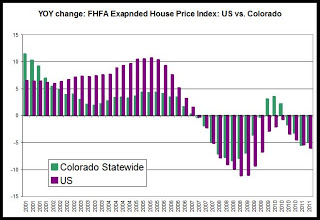 The index values presented and analyzed in this article are not seasonally adjusted.
Posted by Ryan McMaken at 9:13 AM