Multifamily permits up 32 percent so far in 2011 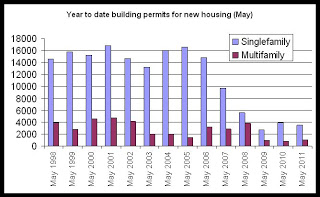 The second graph shows that overall, both multi-family and single-family permits in May are at levels below what was typical over the past decade. 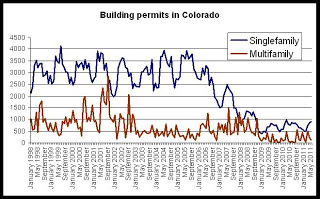 New construction of single-family homes has shown some indications of moderate growth in recent months. Recent stats on May sales of newly-built homes from the Census Bureau showed new homes sold in the entire western United States during May 2011 grew 33 percent over May 2011. Nevertheless, new home sales in the West remain at the second-lowest May total recorded in at least ten years.

In spite of 10-year lows in vacancy rates and increasing strength in rents, new permitting and construction in multifamily housing has been slow to warm up. New construction has likely been constrained by a lack of availability in financing for new projects. 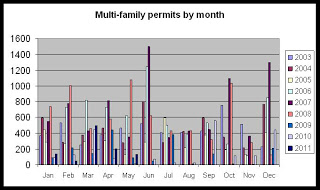 Growth in singlefamily permit activity suggests there is some hope among singlefamily homebuilders. May's permit total for singlefamily units was at a 3-year high, although it remains well below typical May totals reported over the past decade. 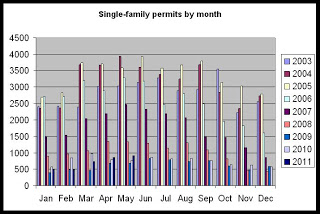