During the first half of 2011, 89 percent of all new multifamily permits were issued in only three Counties: Denver, El Paso and Larimer counties.

This percentage is down slightly from May 2011, in which 95 percent of new permit activity was found in the three counties. Since May, multifamily permit activity has increased in Mesa, Boulder and Summit counties.

Through June 2011, there have been a total of 1163 multifamily permits issued in reporting counties. Of those, 1039 were in Denver, El Paso and Larimer Counties. Totals for all counties that reported multifamily permit activity:

The first map divides counties with permit activity in quartiles. Quartiles are based on a multifamily permit index based on the number of permits compared to the number of existing housing units in each county. 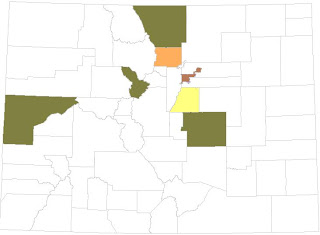 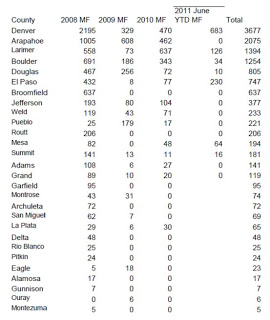 The next two maps show the overall relative trends for reporting counties since 2008 and since the financial crisis. 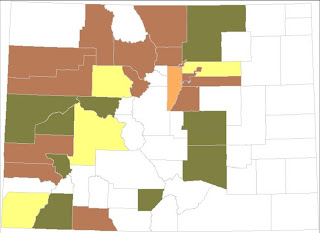 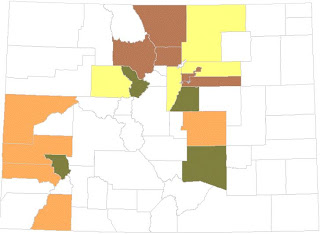 This examination of the past 42 months also allows us to make some guesses about where new multifamily construction will actually take place over the next two to three years. While many counties saw relatively large numbers of permits issued in 2008, it is likely that in many cases, the intervention of the financial crisis prevented many of these permits from becoming housing starts. In many of those cases, the projects are likely still pending if they are proceeding at all. If they are still pending, permits issued in 2008 may still provide some indications of where new multifamily construction may take place in the near term.

Note: When discussed here, a "multifamily permit" refers to one unit in a building of 5 or more units. Counties shown in white have reported no multifamily permits issued.
Posted by Ryan McMaken at 10:20 AM