Housing starts in the West Census region of the US, which includes Colorado, were up 26 percent from June 2010 to June 2011, counting both single-family and multi-family units. According to new housing construction and housing starts data released today by the US Census Bureau, there were approximately 13,700 housing units started in the West during June 2011. Of the new units started, 8,900 were single-family structures and 4,800 were structures containing more than one housing unit. 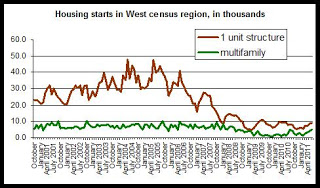 The first graph shows the difference between single-family starts and starts for structures with more than one housing unit. Both remain near ten-year lows, and single-family starts fell 5.3 percent from June 2010 to June 2011. Starts for structures with more than one unit, however, increased by 242 percent during the same period, rising from 1,400 units during June 2010, to 4,800 units during June of this year. Given recent data showing strength in the demand for rental-housing, the housing starts data may suggest that developers of rental housing are beginning to move forward with construction of new multifamily structures.

The second graph shows month-by-month comparisons in housing starts for each year in the West. June's housing starts total increased from May to June as was expected. June tends to be a robust month for new housing starts. However, the June 2011 total of 13,700 starts is the third-lowest total for June housing starts in more than 10 years. On the other hand, June produced the largest number of housing starts reported in any month since October 2008 suggesting that stability may be returning to the market for new construction. 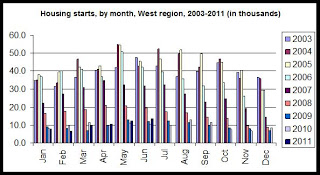 More sustained growth was visible in starts for structures with more than one housing unit. June was the fourth month in a row in which growth in multifamily starts has been significant. As can be seen in the third graph, the June 2001 multifamily total for starts has greatly exceeded the totals for both 2009 and 2010. With the exception of July 2010, June 2011's total for multifamily starts is the largest total since August 2008, before the 2008 financial panic. 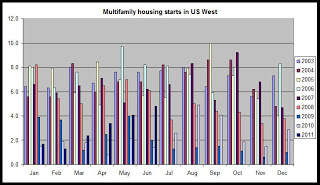 This data suggests that multifamily starts have established a clear growth trend over the past several months, and given the demand for rental housing as an alternative to home ownership, this trend is poised to continue.
Posted by Ryan McMaken at 10:45 AM