Colorado lost 7,559 jobs in June 2011 compared to June of last year, but the non-seasonally-adjusted unemployment rate fell year-over-year from 8.9 percent to 8.7 percent. According to the most recent employment data released by the Colorado Department of Labor and Employment, total employment in June, not seasonally adjusted, fell to 2.453 million jobs. There were 13,788 fewer people in the work force during June, compared to June 2010, which contributed to the decline in the unemployment rate. 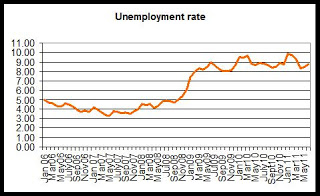 As can be seen in the second graph, total employment and total workforce size have decreased month-over-month, and both remain down in year-over-year comparisons. Both remain well below the July 2008 peak. 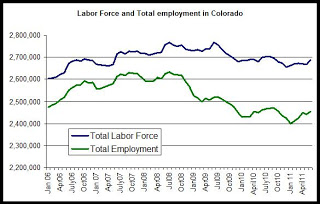 The employment total is 179,000 jobs below the peak levels experienced during July 2008 when there were 2.63 million employed workers. Compared to the labor force peak in July 2008, the labor force is now down by more than 79,000 workers. 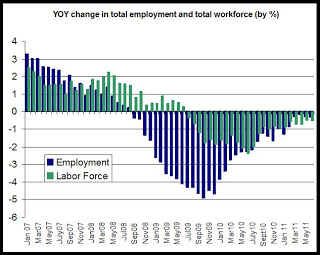 The graph also shows the year-over-change in total employment. Total labor force size has fallen more than employment in the last four months, which helps to explain the drop in the unemployment rate. Although the state has not actually added jobs in the YOY comparisons, the number of people looking for work (as defined by the Household Survey) has declined, pushing the unemployment rate down.

These numbers come from the Household Survey employment data, so the size of the workforce is dependent on the number of people stating that they are actively looking for work if not employed. Discouraged workers who have stopped looking for work are excluded.
Posted by Ryan McMaken at 7:51 AM