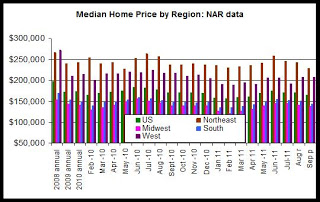 The second graph shows closings by region. In general, closings increased each month from January 2011 to June 2011. July's total fell unexpectedly, but rebounded in August, and then declined again in September. Sales are now expected to decline each month until next January due to seasonal factors. While all regions except the northeast showed a month-over-month decrease from August to September, all regions showed increases in the year-over-year comparisons for September.

Overall, September's sales activity was higher than was the case during September of last year. This was expected. During the summer of 2010, sales activity fell significantly following the end of the home buyer tax credits. Many homeowners rushed to close their home sales by June 2010 in order to take advantage of the tax credit. Consequently, the second half of 2010 showed diminished home sales activity. 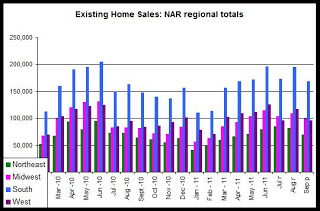 The NAR data tends to be the most optimistic among the various reports on home prices and home sales activity. Most recent home price indices, such as those provided by CoreLogic and Case-Shiller, indicate continued declines in price.

Conclusions: As can be seen in the first graph, home prices during recent months are down from where they were a year earlier, and the median price in the West is still below the annualized median prices for 2008, 2009 and 2010. The region shows stability in prices and a lack of significant upward pressure in prices right now.

Lawrence Yun, NAR chief economist, said the market has been stable although at low levels, and there is plenty of room for improvement. “Existing-home sales have bounced around this year, staying relatively close to the current level in most months,” he said. “The irony is affordability conditions have improved to historic highs and more creditworthy borrowers are trying to purchase homes, but the share of contract failures is double the level of September 2010. Even so, the volume of successful buyers is higher than a year ago and is remaining fairly stable - this speaks to an unfulfilled demand.”.