Bankruptcy filings in Colorado decrease for tenth month in a row 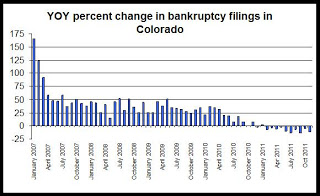 The appearance of sustained declines in the year-over-year comparisons reinforces the likelihood that consumers are beginning to get a handle on debts now that almost four years have passed since the beginning of the national 2007-2009 recession.

The large spike in 2005 preceded the implementation of the new bankruptcy rules. Filings totals have now returned to the levels experienced just prior to the final run-up in cases in 2005, but are down from 2010, when bankruptcy cases appear to have reached a post-2006 peak. 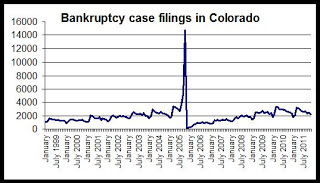 Recent monthly bankruptcy totals are now on a level similar to what was experienced during several months of 2003 and 2004, during a non-recessionary period. Bankruptcies decreased from October to November, falling 11 percent. This drop appears to be due to seasonal factors.

Note: April tends to be a peak month for bankruptcy filings as people use their tax refunds to pay for bankruptcy attorneys and filing costs.
Posted by Ryan McMaken at 4:13 PM

Filing for bankruptcy is a big step. But, it can be just what you need to do. Or, maybe, it's the last thing you should be considering.