The number of single-family home sales closings increased again in November in metro Denver, the Pikes Peak Region, and statewide. According to home sales information released by the Colorado Association of Realtors, the number of single-family closings rose 11.6 percent in metro Denver during November, compared to November of last year. Over the same period, closings rose 13.6 percent statewide, and 19.1 percent in the Pikes Peak region. Statewide in November, there were 4,467 closings. 2,471 of them were in the metro Denver region and 646 occurred in the Pikes Peak region.

The number of closings in all three measures has increased, year over year, each month for the past five months. 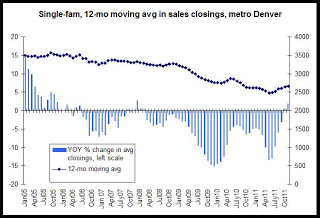 The second graph shows the same measurements for Colorado statewide. The year-over-year change in the statewide average for home sales turned positive in November for the second time in 14 months. Statewide, transactions moved into positive territory in response to the homebuyer tax credits that were were offered in 2009 and 2010, but moved into negative territory again after the expiration of the credits. The statewide moving average increased 3.7 percent in November, year over year. 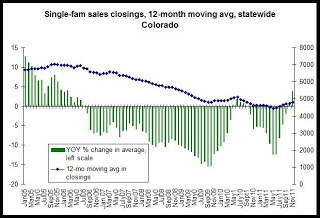 The third graph shows the same measures for the Pikes Peak region. The homebuyer tax credit produced much larger changes in the regional trends in the Pikes Peak region than in metro Denver or statewide. The year over year change in November was positive, making it the first time in thirteen months that the year-over-year change in average sales has been positive. Excluding the run-up in home sales produced by the tax credit in 2009 and 2010, the average in home sales has been largely flat since mid-2009 in the Pikes Peak region, but has turned slightly upward in recent months. 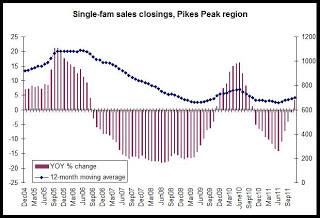 The analysis of moving averages in home sales activity indicates that the markets continue to stabilize in metro Denver, the Pikes Peak region, and statewide. Overall activity has been flat since 2009, but recent upward trends suggest that sales activity will continue to build at least in the near term. Sales totals, however, are likely to continue to be well below peak levels for at least the next year.
Posted by Ryan McMaken at 4:03 PM