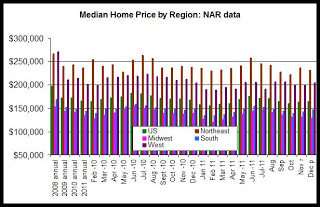 
Note: The median home price numbers were not affected by the major revision in home sales data. As explained here, home sales numbers were recently revised downward by 14 percent by the National Association of Realtors. Past estimates of home sales had proven to overstate home sales in recent years. The revision attempts to re-benchmark the data to make it more accurate.

According to the revised data, home sales transactions (closings) fell 2.1 percent in the West region, while nationally, sales rose 1.4 percent during the same period. The West reported the only drop in home sales among all regions, falling from 95,000 during December 2010 to 93,000 during December 2011 (not seasonally adjusted). In the Midwest region, where sales rose the most, the year-over-year increase was 7.0 percent.

Overall, December's sales activity was higher than was the case during December of last year, except in the West. 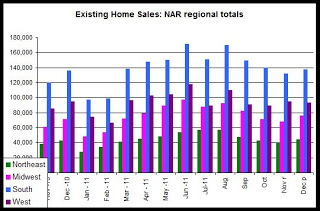