Condo and townhome sales in metro Denver and statewide increased, year over year, for the fifth month in a row in November. According to condo and townhome sales data released by the Colorado Association of Realtors, sales increased statewide 2.3 percent in November 2011 from the same month a year earlier. They increased 3.6 percent in metro Denver over the same period. In the Pikes Peak region, on the other hand, November sales decreased 30.9 percent. In November, there were 924 sales statewide. 600 of them were in metro Denver and 67 were in the Pikes Peak region.

This recent growth trend in statewide and metro Denver sales is now seen in the 12-month moving averages used to track trends in home sales. The highly-cyclical nature of home sales trends makes it difficult to track multi-year trends in home sales. The addition of the homebuyer tax credits from 2008 to 2010 further complicated the picture. So, I have smoothed out the sales totals using a 12-month moving average for each month.

The first graph shows the 12-month moving averages in total condo and townhome sales in metro Denver and statewide. The overall trends since 2007 is clearly downward, although average statewide sales have largely stabilized since late 2009. Until recently, the moving average for condo and townhome sales had continued to move downward through late 2010 and most of 2011, although there have been some gains in recent months. The moving average in statewide sales increased 2.2 percent while the metro Denver average fell 1.9 percent. Nevertheless, the metro Denver decrease was the smallest year-over-year drops since October 2010. 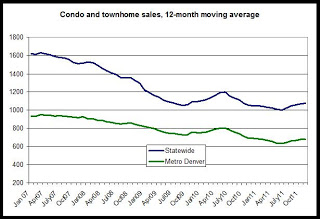 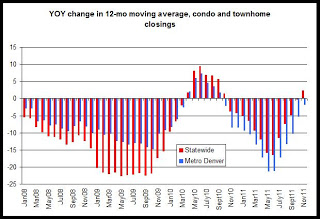 In the Pikes peak region, similar trends hold, although the homebuyer tax credits seem to have had a broader impact with the year over year change in sales remaining in positive territory for 15 months in a row. As can be seen in the third graph, sales activity has since declined. With a drop of 16 percent, November's year over year change was the largest decline reported since June 2009. This suggests that sales activity for condos and townhomes in the region continues to face headwinds. 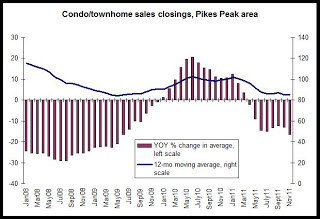