Home values in the United States were essentially unchanged in November, decreasing a marginal 0.1 percent from October, according to this month's Zillow Real Estate Market Reports. Annually, the Zillow Home Value Index fell 4.6 percent from November 2010 to $147,800 and has returned to late 2003 levels.

Regionally, home values appreciated or remained flat from October to November in 60 percent of the 165 housing markets covered by Zillow, compared to 24 percent last year. Major metropolitan statistical areas (MSAs) that experienced flat or increasing home values include Los Angeles, Washington, Miami-Ft. Lauderdale, Fla., San Francisco and Detroit. On an annual basis, the median home value is down for nearly all (90 percent) of the 165 MSAs covered by Zillow, although the rate of annualized depreciation has slowed significantly in the majority of the markets. 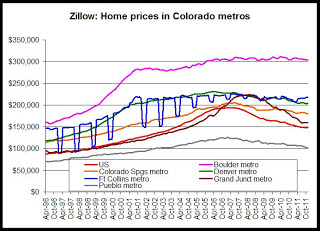 Zillow home valuations, known as the median "Zestimate valuation" should be taken with a grain of salt, but in this case they do appear to be in line with other home price indices and trends. The metro trends presented here match up well with the metro trends provided by FHFA's quarterly reports on home prices in Colorado.
Posted by Ryan McMaken at 9:34 AM