Today, the Division of Housing released its 2011 year-end report on releases of deeds of trust. Since release activity reflects trends in home purchase and refinance activity they can help us identify some trends in demand for home loans.

The report notes that, in general, release activity responds to movements in the mortgage rate in ways very similar to that seen in mortgage refinance activity. For example, in the first chart, we see that there was a surge in release activity in 2003. 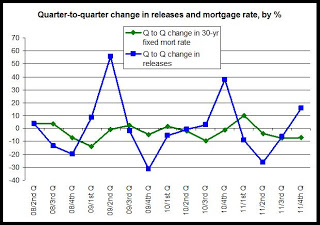 The second graph shows the same measure, except on a year-to-year basis. Given the longer time period, in the annual data, there is not the lag we see in the quarterly data. A year that shows falling mortgage rates shows a rise in release activity, in most cases. 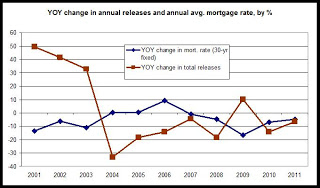 See the full report here.
Posted by Ryan McMaken at 9:28 AM