In December of this year, new single-family home sales fell in the US, and were down in the West region, which includes Colorado. According to new data released by the Census Bureau today, new home sales in December fell to the lowest December total recorded in at least ten years.

The report, which monitors sales activity for newly constructed houses, reported that in the West, new home sales were down 42 percent year over year, with 4,000 sales in December 2011, which was the lowest December total recorded in more than ten years. There were 7,000 sales during December 2010. Nationwide, sales fell 8.6 percent, falling from 23,000 to 21,000 during the same period.

In the West, no month has shown fewer than 4,000 new home sales for the region for any month during the past decade. 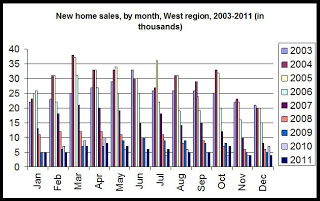 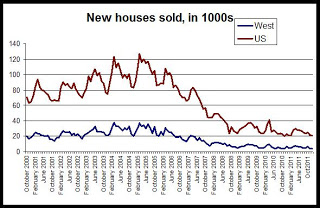 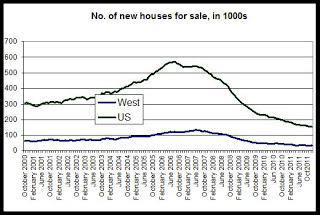 At 34,000, the number of new single-family homes for sale in the West is near the lowest level it's been in more than ten years. No month has shown fewer than 33,000 new homes for sale during the past decade. This reflects very low demand in the face of an ongoing and large number of new foreclosures and low-priced properties in many areas of the West, including Colorado. Although foreclosures have fallen in Colorado in recent years, foreclosure rates remain near historic highs. The national total of new homes for sale during December set a new ten-year low of 156,000.

As a final note, we can also look to the new home inventory. In this case, we calculate inventory by subtracting the number of new home sales in a given month from the number of new homes for sale at the end of the previous month. In the final graph, we see that the inventory has essentially been flat since March 2011, hovering near 30,000 homes. There was an inventory of 29,000 homes during December 2011. This is good news for owners of existing homes seeking to sell homes since it suggests that fewer new homes are sitting and waiting to be sold, thus diminishing some of the inventory-driven downward pressure on prices. 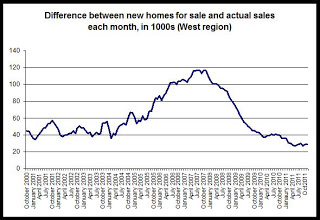