Colorado gained 80,107 jobs in December 2011 compared to December of 2010, and the non-seasonally-adjusted unemployment rate fell year-over-year from 8.7 percent to 7.9 percent. According to the most recent employment data, collected through the Household Survey and released today by the Colorado Department of Labor and Employment, total employment in December, not seasonally adjusted, rose to 2.504 million jobs. There were also 63,000 more people in the work force during December, compared to December 2010.

The unemployment rate remained largely flat from November to December in spite of job gains due to a relatively large number of workers joining the labor force. 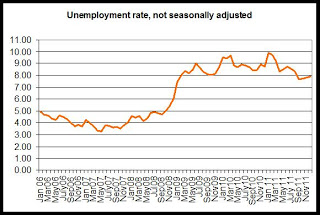 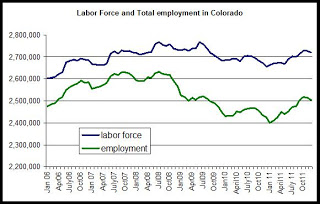 The employment total is now 128,000 jobs below the peak levels experienced during July 2008 when there were 2.63 million employed workers. Compared to the labor force peak in July 2008, the labor force is now down by more than 48,000 workers. 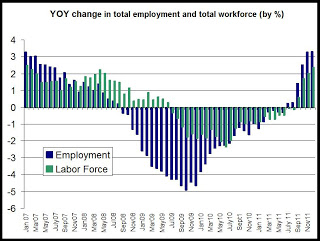 These numbers come from the Household Survey employment data, so the size of the workforce is dependent on the number of people stating that they are actively looking for work if not employed. Discouraged workers who have stopped looking for work are excluded. On the other hand, the Household Survey picks up on small business and start-up employment that may be missed by the Establishment Survey, the other commonly-used measure of employment.
Posted by Ryan McMaken at 10:26 AM