According to November's employment data, released by the Colorado Department of Labor and Employment, overall employment in Colorado rose for the fifth month in a row in November. Thanks partially to continued declines in the labor force, the unemployment rate also fell to 7.8 percent.

Construction is a key indicator since it is connected to housing production. The construction jobs examined below also include non-residential construction. 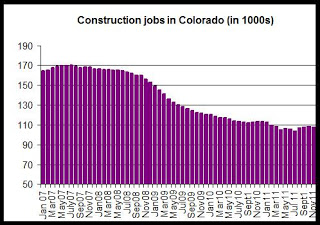 Unlike many industries, construction jobs did not drop to an initial low and then rebound. Overall, total construction employment has continued to drop since 2007.

Retail jobs, and jobs in the leisure and hospitality industry are key factors in the rural resort economies, and are also important statewide as sources of income for low-income households. In the chart below, we see that retail jobs have recovered somewhat but have not returned to peak levels.

Leisure and hospitality jobs, on the other hand, have recovered to a significant degree since early 2010 and leisure jobs have now exceeded 2008's peak levels.

Retail jobs have not recovered as much as those in leisure and hospitality. From November of last year to November 2011, total employment in retail is up about 4,300 jobs. Since the April 2008 peak, retail jobs are down 7.6 percent, or about 17,500 jobs. 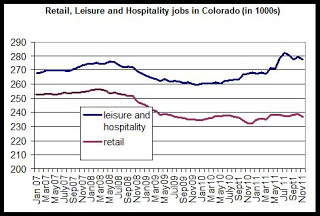 (Data is seasonally adjusted.)
Posted by Ryan McMaken at 9:14 AM