Remodeling activity in U.S. West outpaces other regions in November

According to Buildfax's November 2011 release:

In the graph, we see that the year-over-year percent change in the western region has outpaced all other regions and the U.S. as a whole for the past six months. Growth rates have been solid in recent months. November 2011's year-over-year change was considerably larger than November 2010's year over year increase. 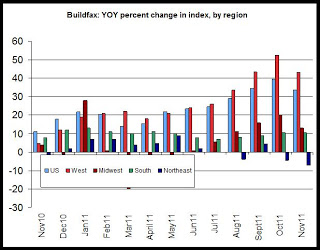 Overall, the report suggests substantial increases in the amount of residential remodeling activity in the economy. Often, remodeling activity reflects an availability of household capital for some construction and home-improvement activities while there may be an absence of the large amounts of household capital necessary for relocation and new home purchases. The solid increases in recent months suggest an increasing willingness on the part of homeowners to spend on remodeling. Home sales data, meanwhile, suggests that fewer buyers mare making the decision to actually purchase a new home.

The Buildfax press release states that the rise in remodeling activity in most of the nation reflects a national trend in which homeowners have been spending on remodeling as an alternative to home home purchases in a market in which it is difficult to sell one's home. 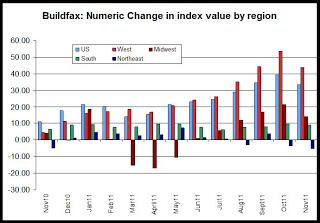 The BuildFax Remodeling Index is based on construction permits filed with local building departments across the country. The index tracks the number of properties permitted. The national and regional indexes all have an initial value of 100 set in April of 2004, are based on a three-month moving average, and are not seasonally adjusted.
Posted by Ryan McMaken at 12:40 PM