The Bureau of Labor Statistics released Friday the March CPI for US urban areas and regions. In the West region, from March 2011 to March 2012, the CPI increased 2.4 percent. This is the second-largest year-over-year increase since 2008, although it is a relatively small increase.

In the first graph, we that the year-over-year change in March for the CPI was down a little from March 2011's change of 2.6 percent, and was well down from 2008's peak change of 3.6 percent. 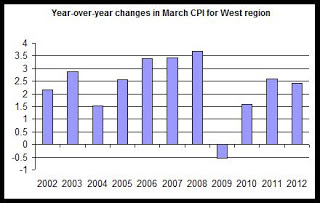 Housing costs, which are a major portion of the CPI, continue to help keep increases in the CPI down. Housing was up year over year by 1.9 percent, as was "owners' equivalent rent." Rents for tenants, however were up by 2.6 percent.

On the other hand, gasoline was up, year over year, by 9.9 percent and apparel was up by 4 percent. Food was up by 2.8 percent.

Although annual increases in rent (according to State of Colorado data) have exceeded 5 percent in many areas of the state, the housing component of CPI also reflects declining and stagnant home prices, which indirectly mitigate the increases in rent levels within the index.

The second graph shows year-over-year changes in CPI for all months since 2002. Annual CPI growth hovered around 3 percent for much of 2011, but has been declining during the past six months. 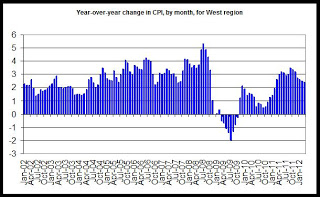 The CPI increase form February 2012 to March 2012 was 0.9 percent, which was the largest month-to-month increase since March 2011.

The index for all items less food and energy rose 0.2 percent in
March after increasing 0.1 percent in February. Most of the major
components increased in March, with the indexes for shelter and used
cars and trucks accounting for about half the total increase for all
items less food and energy. The indexes for medical care, apparel,
recreation, new vehicles, and airline fares increased as well, while
the indexes for tobacco and household furnishings and operations were
among the few to decline in March.