Today, the Division of Housing released its first-quarter 2012 report on releases of deeds of trust. Since release activity reflects trends in home purchase and refinance activity they can help us identify some trends in demand for home loans.

The report notes that, in general, release activity responds to movements in the mortgage rate in ways very similar to that seen in mortgage refinance activity. 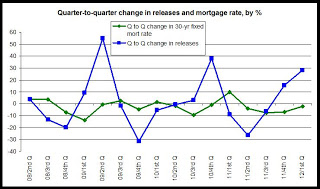 During the first quarter of 2012, however, following four quarters in a row of declining mortgage rates, we get a substantial increase in the number of releases - a 28 percent increase form the fourth quarter of 2011.

See here for analysis of releases and mortgage rates going back to the year 2000.

Although the relationship between mortgage rates and releases has weakened in recent years due to tightening of credit and a lack of consumer confidence, the relationship does appear to still be holding.
Posted by Ryan McMaken at 11:13 AM