Delinquencies continue to decline in Colorado, spurring declines in foreclosures

Today, we released the November foreclosure report for Colorado's metro counties. We've received some questions about the underlying factors behind the 28 percent decline we're seeing this year.

Much of it does have to do with the administrative "slow-down" in the processing of foreclosures that was initiated by the lenders themselves. That is not the only factor, however. As can be seen below, mortgage delinquencies in Colorado were down again during the third quarter.

According to the National Delinquency Survey, released last month by the Mortgage Bankers Association, the percentage of mortgage loans in some state of foreclosure (foreclosure inventory) in Colorado during this year's third quarter fell to 2.1 percent.

As noted in an earlier post, Colorado was 8th best in the nation for the percentage of loans that are either in foreclosure or are 90 or more days delinquent.

Similarly, only ten states reported higher percentages of loans that are in foreclosure. 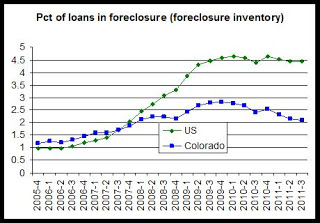 To supplement the previous post on the inventory plus 90+ day delinquencies, I've included the chart below:

During the third quarter, new 30-day mortgage delinquencies fell year over year to the lowest third-quarter percentage recorded since 2006.

2.39 percent of all mortgage loans surveyed were 30-days delinquent during the third quarter, falling from 2010's third-quarter rate of 2.55. 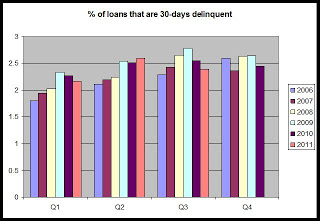 We also can note that the the third third and fourth quarters tend to have the highest delinquency rates when compared to other quarters.
Posted by Ryan McMaken at 1:55 PM