The Bureau of Labor Statistics released today the November CPI for US urban areas and regions. In the West region, from November 2010 to November 2011, the CPI increased 3.2 percent. This is a significant increase over the year-over-year increases for November during 2008, 2009 or 2010, during which the change in CPI never exceeded 1.5 percent.

In the first graph, we can see that the CPI growth in November 2011 is now tied with November 2005 for the third-highest increase observed for November during the past ten years. Only 2004 and 2007 showed larger increases, and price increases in those years were partially countered by strong growth in employment and incomes, but at the present time, income growth has been flat in recent years, as discussed here. 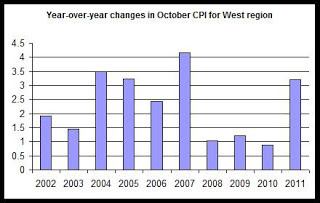 The price increases are being largely driven by transportation costs, such as gasoline, which increased by 7.2 percent, year over year. Food costs and apparel also increased significantly, rising 4.1 percent and 4.7 percent, respectively.

Housing prices were restrained at a year-over-year increase of 1.8 percent. Although increases in rent have exceeded 5 percent in many areas of the state, the housing component of CPI also reflects declining home prices, which mitigate the increases in rent levels within the index.

Recent price increases will impact household calculations and attitudes on spending as many households conclude that discretionary spending will need to be scaled back in the face of increasing food and transportation costs.

Nationally, the CPI was unchanged for the second month in a row:

The Consumer Price Index for All Urban Consumers (CPI-U) was
unchanged in November on a seasonally adjusted basis, the U.S. Bureau
of Labor Statistics reported today. Over the last 12 months, the all
items index increased 3.4 percent before seasonal adjustment.

The energy index declined for the second month in a row and offset
increases in the indexes for food and all items less food and energy.
As in October, the gasoline index fell sharply and the index for
household energy declined as well. The food index rose slightly in
November, though the index for food at home declined as four of the
six major grocery store food group indexes fell.