Typically, I report the number of home sales closings for each month. Naturally, there is a seasonal cycle for home sales that can be seen in the first graph below. Sales typically bottom out in January or February, while they typically peak in July or August. 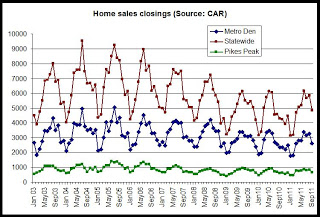 This seasonality makes it somewhat difficult to immediately see patterns over several years. In the first graph, we can see a gradual drift downward over the past 4 years. However, over the past three years, the presence of the home buyer tax credit has further complicated the picture by changing the usual distribution of sales across the year of 2010. As can be seen in the graph, the usual pattern of sales transactions has been altered during 2010 due to a number of buyers rushing to put homes under contract before the April expiration of the credit.

This has made it difficult to make year-over-year comparisons for each month.

In order to make it easier to compare activity year-over-year, and to make it easier to identify multi-year trends, I have calculated 12-month moving averages for each month in the three graphs below. This helps erase some of the seasonality, and also allows us to make more reliable comparisons with 2010 in spite of the tax credit distortions. 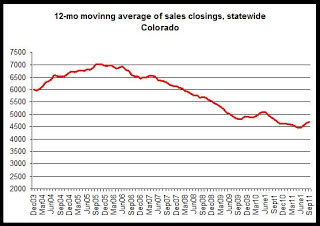 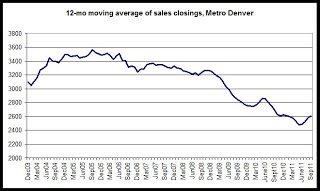 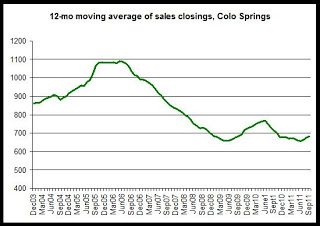 In all three areas we find that the average has increased over the past three months. However, the average continues to be down year over year, and this suggests that there is still a fair amount of reticence on the part of buyers in the market for existing homes. It is also clear that total home sales continue to be well down from the peak levels seen during 2005 and 2006.

Note: These transaction totals are for single-family structures only.
Posted by Ryan McMaken at 10:23 AM